Against biography: Nabokov versus Field 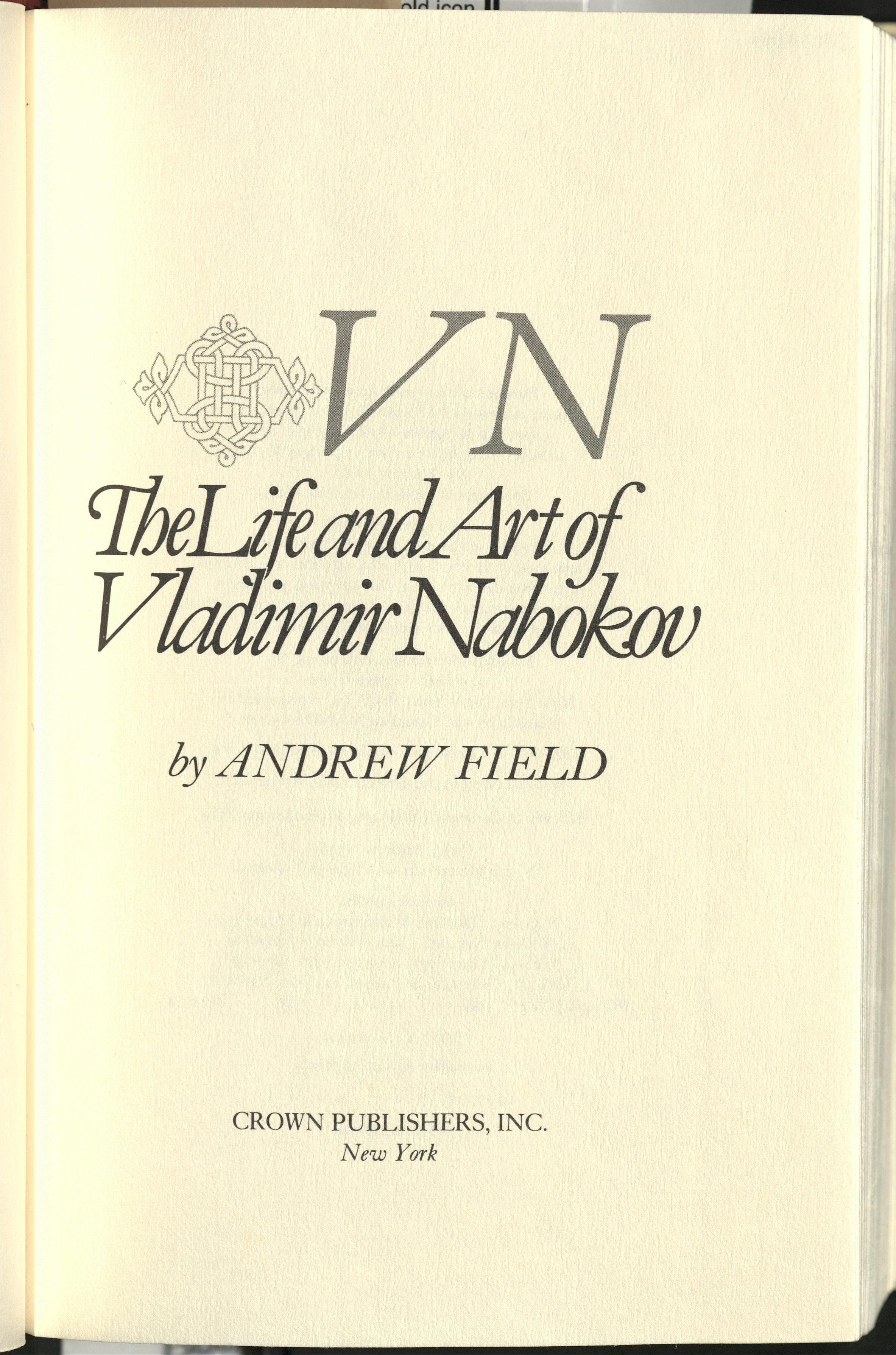 Among the Nabokov family volumes recently added to Houghton Library’s catalog are several owned and annotated by Véra Nabokov. Vladimir’s wife of 52 years, Véra was indissolubly his literary partner as well: she read, edited, and translated his work, besides managing his business and legal affairs; attending his college courses and even teaching them when he fell ill; and innumerable other tasks. Apart from her amplification of Vladimir’s voice, we typically hear little from Véra herself: “the more you leave me out,” she once told biographer Brian Boyd, “the closer to the truth you will be.” (For further reading on the Nabokovs’ relationship, see this New Yorker article.) In the volume pictured here, though, Véra candidly disputes the work of another biographer, Vladimir’s first, through substantial marginalia.

VN: The Life and Art of Vladimir Nabokov is Andrew Field’s third book-length study of Vladimir Nabokov. Field dedicated his career to the study of Nabokov – his first book brought the author’s early Russian-language work out of obscurity for a Western audience – and for a time won the author’s favor, and close access to him as a biographical source, as a result.

VN, published after Nabokov’s death, folds both of Field’s prior books, along with supplementary material, into a single critical biography, but one reflective of the soured relationship between author and subject. Gone are the quasi-Nabokovian structural flourishes that characterized the prior works; in their place are numerous speculations and leaps of logic. Reviews from the time of VN’s publication, such as this review from the London Review of Books and this one from the Washington Post, offer more detail on Field’s trajectory from protégé to outcast; on the questionable suppositions that characterize VN; and on the continued antipathy between Field and the surviving Nabokovs. For Brian Boyd’s own review, see the Times Literary Supplement, 21 April 1987, pages 431-2. 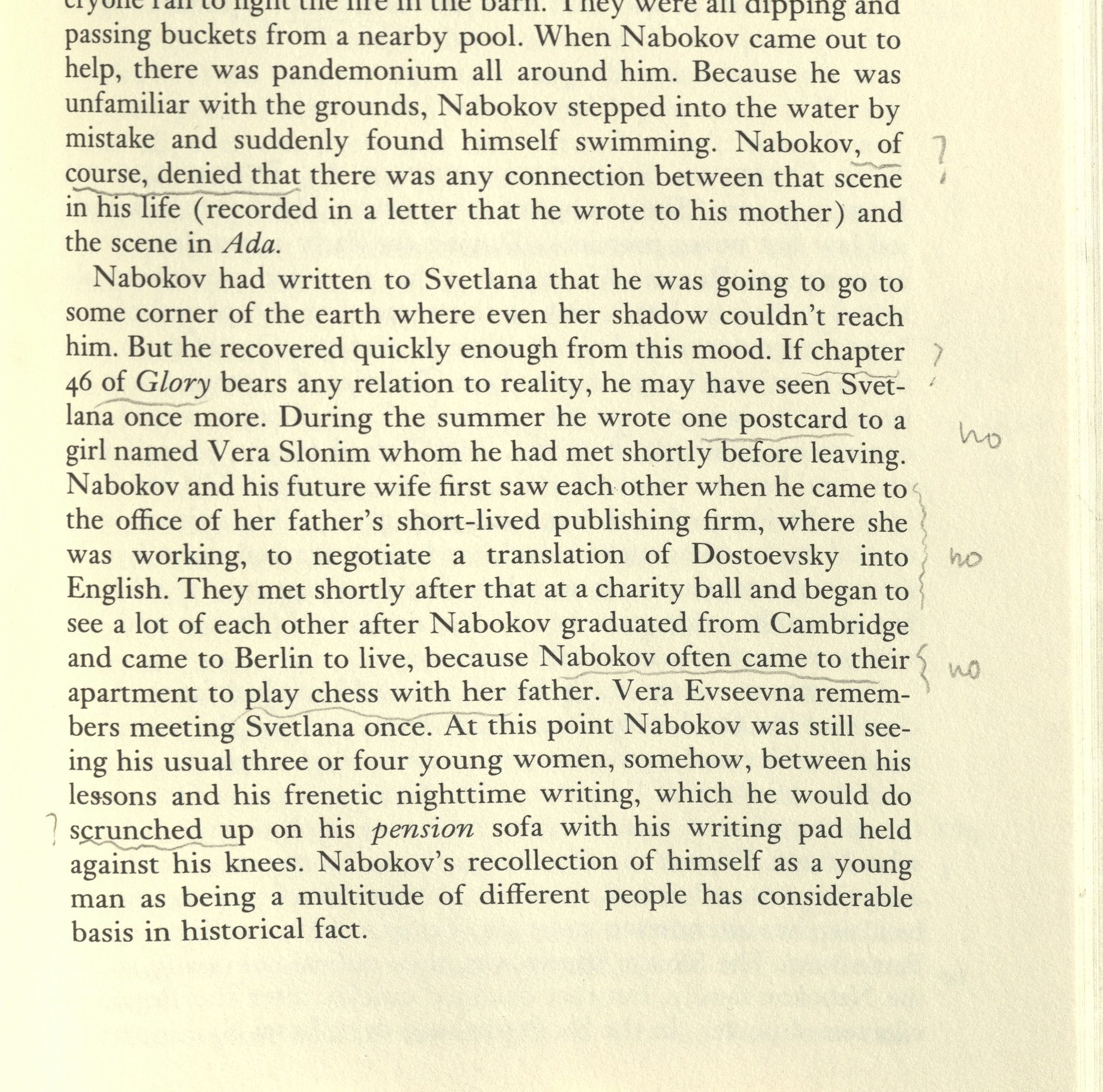 Véra was a curator not only of Vladimir’s literary output and lifestyle but of his public figure, his image, his legacy. Inevitably, then, she and VN are at loggerheads throughout–Véra peppers the margins with question marks, exclamation points, and ‘no’ upon ‘no’, serially refuting Field’s conjectures and recreations. 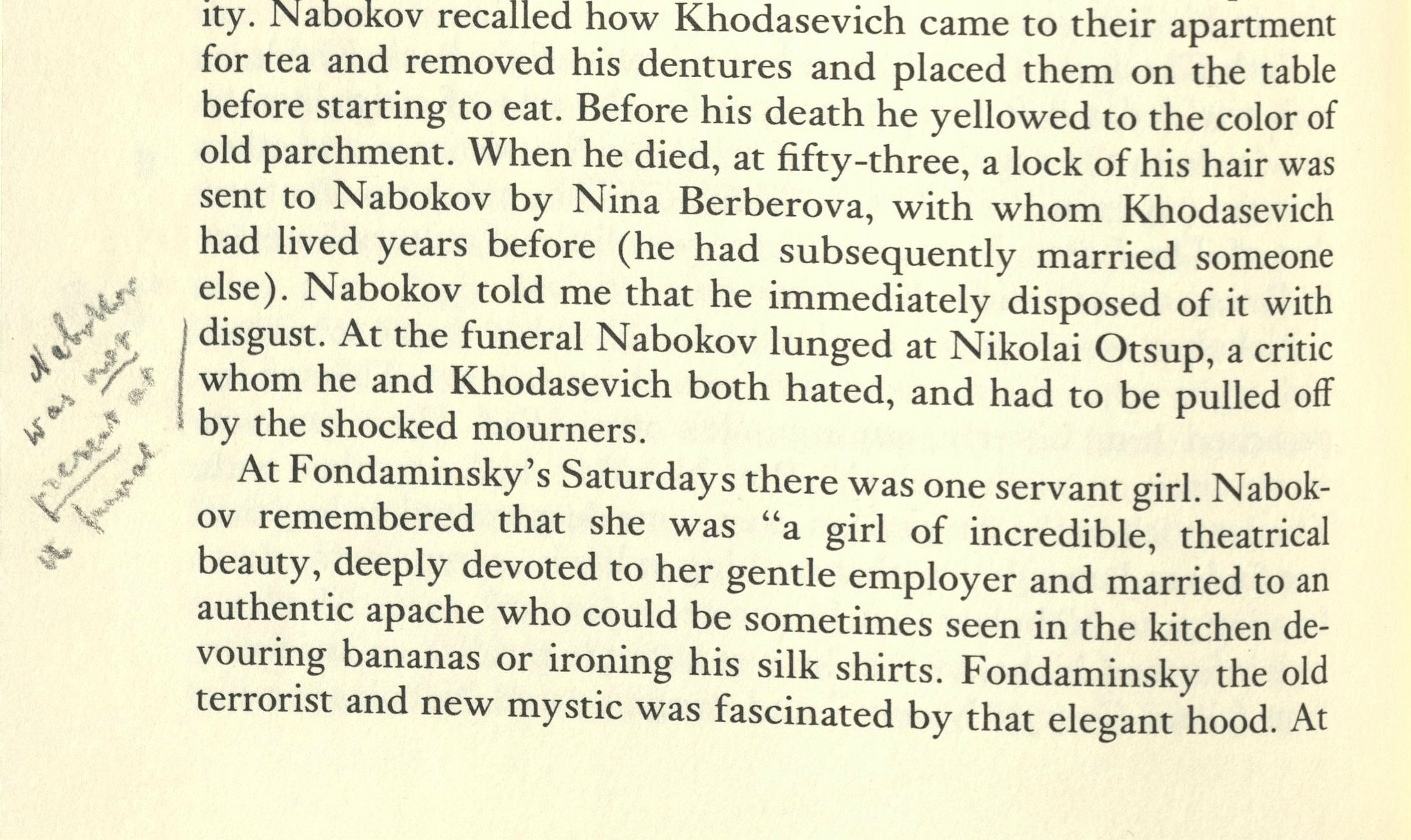 At times, she offers her contrasting memory of events: Field describes Nabokov’s aggressive behavior at a funeral; but Véra says he was not in attendance. Field characterizes Nabokov’s relations with Aleksandr Solzhenitsyn as “strained”; Véra writes: “there were no relations”. From brief marks of disbelief to lengthy explications, Véra’s comments amount to a considerable negation of Field’s text.

Thanks to bibliographic assistant Ryan Wheeler for contributing this post.

Thanks to Houghton Library for sharing this blog post.