The 2016 TDWG Biodiversity Information Standards meeting was held at the Centro de Transferencia Tecnológica y Educación Continua (CTEC) in San Carlos, Costa Rica. Hotels and other activities were in La Fortuna, about a 45 minute bus ride from CTEC.

BHL was represented at the TDWG 2016 conference with a symposium, "BHL: 10 Years of Innovation and Growth". The panel consisted of:

The session was attended by about 70 people. The conclusion of the session was a discussion with the audience about desires for the future direction of BHL and features or services that could be implemented as BHL explores refactoring the BHL platform. Among the topics mentioned by the audience were: integration of visual resources in BHL and expanding in-copyright material.

The keynote, by Dr. Rodrigo Gámez Lobo (founder and former Director General and President of the National Biodiversity Institute) explored the future of Costa Rican biodiversity as exemplified in his work On Biodiversity, People and Utopias (1999). His talk addressed the theme of this work, in which he states, "Our real goal is to make the society come to the understanding that, because of being something that directly affects quality of life, materially, intellectually and spiritually, we must preserve at all costs the rich biodiversity of the country". 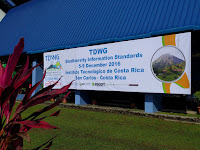 Two papers of interest in the contributed papers session were  a historical review of TDWG and a paper  describing a new publishing practice that relies on extraction of highly relevant details (species descriptions, for example) from longer publications.

A highlight of the meeting was the TDWG 2016 Bioblitz at the nearby Texas A&M Soltis Center. The bioblitz helped to create a biodiversity snapshot of TDWG 2016. Participants were encouraged to take the opportunity to observe and to post their pictures of local biodiversity. The event took place in a torrential rainstorm, but the event still provided some observations and camaraderie.

There were other opportunities to see some of Costa Rica's amazing biodiversity, among those sighted were: