William Brewster (1851-1919) was a renowned American amateur ornithologist, serving as a co-founder of the American Ornithologists’ Union, the first president of the Massachusetts Audubon Society, and a curator at Harvard’s Museum of Comparative Zoology (MCZ). As a part of the CLIR-funded BHL Field Notes Project, MCZ has been digitizing Brewster’s journals, diaries, letters, and photographic prints, which are held in Special Collections at the MCZ’s Ernst Mayr Library.

Most of Brewster’s observations are based in New England, where he split his time between two homes in Cambridge and Concord, Massachusetts. Brewster would stay in a cabin by the Concord River to study nature and escape city life in Cambridge. He also took notes when travelling: his notebooks document trips to the southern USA, the Caribbean, and Europe. A black and white photograph of Brewster sitting on the front doorstep of his cabin in Concord, Ma. The small, one-story log cabin is set in a hillside and surrounded by small trees and shrubs. The back of the photograph has the note: “Concord, Mass. May 20, 1892.” (Ernst Mayr Library Special Collections, call no. bBr97.70.7.)

Brewster’s writings contain a wealth of information, from data on temperature and weather conditions to descriptions of animal behavior and personal musings. Some of the extensive Brewster collection is already available to view on BHL – here’s a sampling of the kinds of information you’ll find.

In the warmer months, Brewster often camped at Lake Umbagog (north of the White Mountain National Forest, straddling Maine – New Hampshire border), where he spent his days tracking the progress of bird nests around the lake and making other general observations. Here’s a typical example of one of Brewster’s bird lists, recorded at Lake Umbagog in 1907. The larger numbers are dates, with superscripts indicating the number of individuals counted that day. Asterisks tell us that the bird was heard vocalizing. Some additional details are also penned in (for example, he notes that Dendroica pensylvanica, the Chestnut-sided Warbler, was in an apple tree). [1] 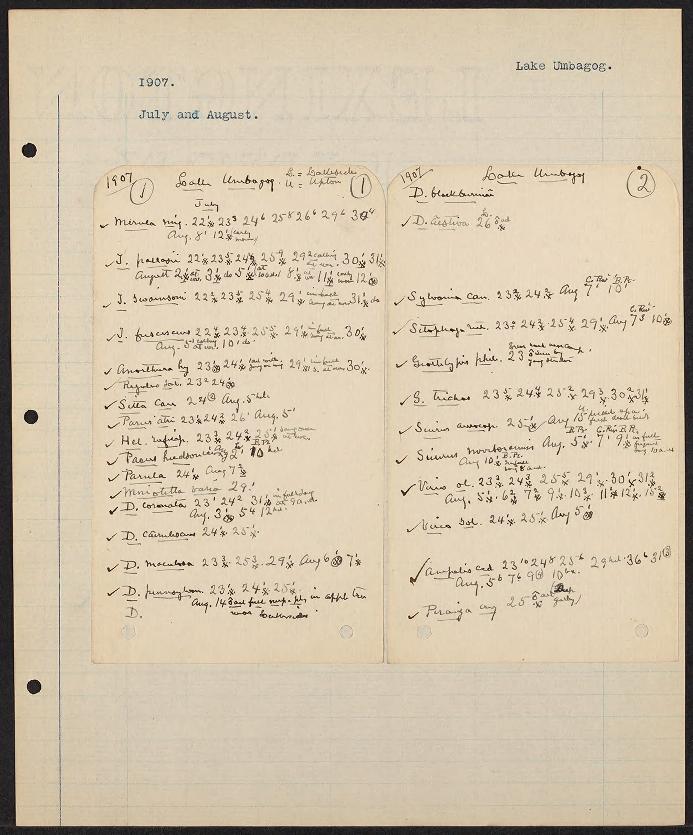 An image of a page from a journal. Two smaller papers with handwritten, numbered lists are attached to a larger page. The heading reads: “Lake Umbagog, 1907. July and August.” The lists have scientific names of bird species, followed by dates, numbers of birds observed, and some additional notes. (1907. Journals of William Brewster, 1871-1919 (inclusive). Find this journal on BHL.)

Beginning in the 1890s, Brewster’s journals document a transition of focus from mainly specimen-collecting to photography and documenting behaviors. (His journals reveal an interesting story about his increasing ethical conflict and desire to study wildlife without contributing to its decline. You can read more about this in a previous BHL blog post found here.) Earlier in Brewster’s career, his journals list and provide details on species collected – data that is similarly useful to the list above in that it gives an indication of species distribution and abundance. It also corresponds with existing specimens and documents the impact made by scientific collectors of the era.

The kinds of data in these journals diversifies as Brewster started devoting more time to documenting animal behaviors. In many ways, this work seems to have been harder than getting a good shot at a bird. Even with today’s apps and audio libraries, figuring out bird calls can be a challenge. Equipped with just pencil, paper, field glasses and ears, studying bird vocalizations is much trickier, as shown by Brewster’s notes below from 1902. [2] Today, we can represent bird vocalizations visually using spectrograms. In order to translate sounds to text, Brewster listened diligently to invent mnemonics, describe patterns, and make comparisons to other more familiar sounds.

An image from one of Brewster’s journals showing his written renditions of an unknown bird’s vocalizations. He writes: “The voice was much louder than that of any Blackbird and was also more penetrating. The cry lasted from ½ to ¾ of a second (timed with a stop watch) and I noted the following variations: Kèt – kèt – kèt – ă – ă – ă – ă – ă (the a sounded as ah) [etc.]” https://s.si.edu/2q6rKGa.

It’s worth mentioning that Brewster’s animal observations weren’t limited to birds, and that a lot of his animal encounters made for interesting stories. Below is a sketch of a moose from Lake Umbagog, observed in August 1869. [3] His impression: “He seemed like some long-forgotten antedeluvian creature which, arousing from a sleep of thousands of years, was wandering aimlessly about in a land so changed that it no longer had any place for such strange monsters.” 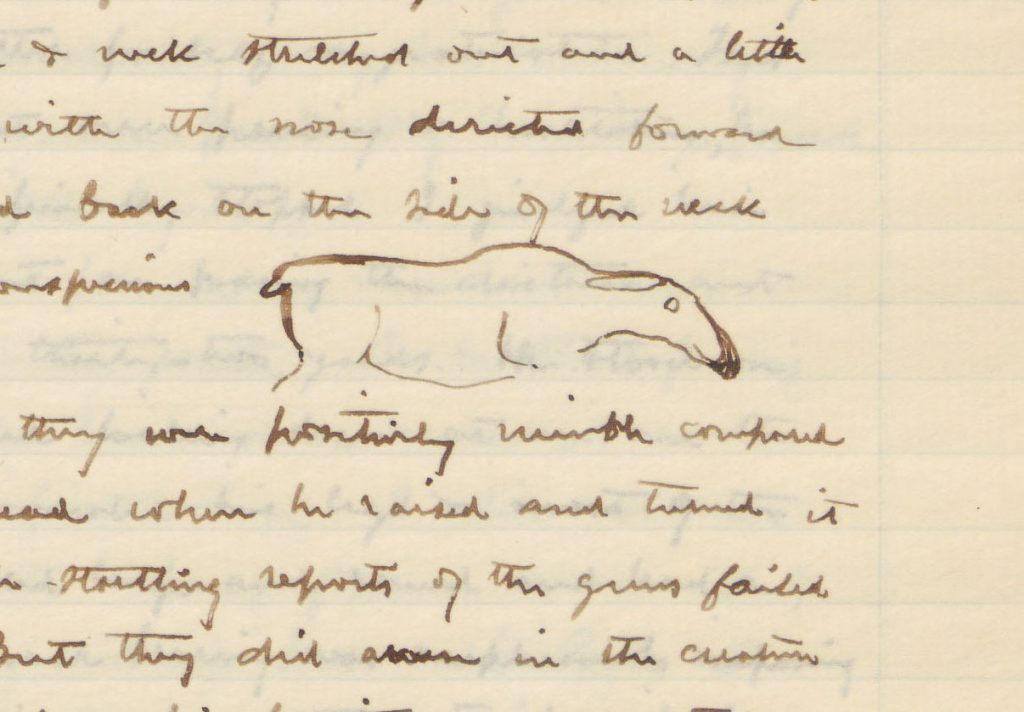 A simple ink-sketched outline of a female moose with head held low and ears lying flat back. The sketch is embedded in a paragraph handwritten in cursive script on lined paper. https://s.si.edu/2GD0beA.

As though telling the story to a friend, he recounts following the moose through the wetland in his canoe – sometimes ending up way too close for comfort. After talking to a local guide, he learned that the moose that he’d seen was a mid-sized female, and concluded, “If she was not really a very large one I have no wish to be equally near to a big bull!”

Because he returned to Lake Umbagog year after year, Brewster was able to notice longer-term changes in familiar ecosystems. Increasingly, these changes were man-made disturbances: the clearing of woods, the creation of new roads, and other urbanizing changes. He also recorded how local communities of animals and plants responded after these disturbances. The following passages from Brewster’s field notes document some changes that he saw in the Maine woods as a consequence of logging for paper mills, and include some of his own predictions.

“Where the road passes through the woods … the roadworkers last May cut away the mountain maples, cornels and other shrubs and low trees that made such a beautiful border to the forest clearing in their places a broad belt of bare rocks half covered with the fallen brush wood. This deed of vandalism was performed while I was here and at the time I feared that years must elapse before Nature, with all her diligence, could repair the injury.

“I underrated her powers for already this thicket of road is, if anything, more beautiful than ever. Fire weed, Eupatorium, Impatiens, Asters, Golden rod and several other tall and rank flowering plants have shot up through and almost perfectly concealed the unsightly brush and stone heaps and I have rarely seen a more brilliant or attractive display of wild flowers. The fire weed is especially tall and fine and the jewel weed grows in solid beds yards in extent. Of course the Humming birds had not overlooked such a feeding ground. There were at least three of them there at once including an adult male with blazing ruby throat at which I fired an ineffectual shot.” [4]

In this instance, Brewster noticed that one year was enough time to see plant growth after the woods had been cleared, that the colonizing plants were different from the ones that characterized the location before, and that they had impacted animal life. He penned these observations on ecological succession just a few years before the first scientific paper on this concept was published (“An Ecological Study of the Sand Dune Flora of Northern Indiana”, Henry Chandler Cowles, 1898.). [5]

A painting of Ruby-throated hummingbirds. Two male birds with red throats are hovering face-to-face with their beaks nearly touching. A female sits below in a branch with white flowers. All the birds are green above with white undersides and have long, narrow beaks. Below the painting is the text: “RUBY-THROATED HUMMING Order – MACROCHIRES Family – TROCHILUS Genus – ARCHILOCUS Species – COLUBRIS National Association of Audubon Societies.” (Portraits and habits of our birds. v.2. New York city: National association of Audubon societies,1920. (See on BHL.)

The following year, he wrote:

“The Lake shore has been sadly marred … by the lumbermen who last winter cut all the spruces and many of the fine, tall white pines all the way from this landing to the deep cove near the Tidswell place. […] Lumbering is a very different business now from what it was twenty years ago. Then only the larger trees were taken; now the pulp mills devour everything and nothing is spared thicker at the base than five inches! […] These changes in the character of the forests must make speedy & considerable changes in the bird fauna. The shore near Crocker’s camp, for instance, has been one of the chief breeding grounds for the Bay breasted Warbler. They will breed there no longer, now that all the spruces are gone.” [6]

Knowing now that local extirpations and even total extinction can occur (this was the decade when the passenger pigeon disappeared from the wild), he would have penned this prediction with heavy heart. To help preserve an area he cared about – his familiar stomping grounds along the Concord River in Concord, Mass. – over time, Brewster purchased 300 acres of the riverfront. His ‘October Farm,’ across the river from Great Meadows National Wildlife Refuge, is now protected land with trails recently opened to the public – while his writings, notes and photographs preserve the region for us as he knew it in the 19th and early 20th centuries.

(If you’re interested in learning more, I write an ongoing series of blog posts on the Brewster collection on the Ernst Mayr Library blog. You might like to see archival and modern photos of October Farm, Brewster’s property in Concord.)

Elizabeth Meyer is a Library Project Assistant at the Ernst Mayr Library of the Museum of Comparative Zoology at Harvard University.